I will teach other political parties a bad lesson in 2023, Adamawa governor

Ahead of the 2023 general election, Governor Fintiri of Adamawa State has announced that he will teach the parties a lesson.

The Adamawa State governor made the remarks while confirming the approval of the state council meeting. 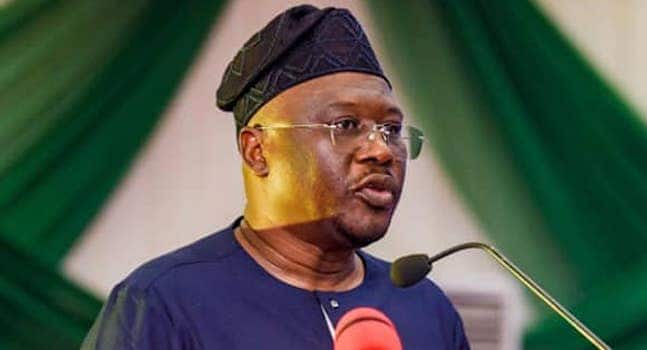 Fintiri is a PDP member who defeated his predecessor Jibrilla Bindow and APC candidate in the 2019 general election.

Governor Ahmadu Umaru Fintiri of Adamawa State has said he will teach other political parties in the state a lesson in the upcoming 2023 general election.

The Daily Trust reports that Fintiri made the remarks during a meeting with the Adamawa State Councilors at the Government House, Yola, on Wednesday, December 1.

The governor of Adamawa State was quoted as saying:

“They have failed in the four years they have been able to govern the state, and we will not allow them to deceive our people, we will continue to work hard, to bring about democracy.

“On that note, I believe, we will teach them the bad lessons that they will lose all elections from the presidency to the last position in society, that is to the council.”

“We want a local leader regardless of religion or ethnicity,” Fintiri said

Sometime in October, Fintiri stated that Nigerians need good leaders regardless of their ethnicity or religion.

He was quoted by Channels Tv as saying:

“Nigeria’s problem is not a regional one, it is up to us to find a good candidate. Wherever this man came from, regardless of his religion or ethnicity.

“What you and I hope for today is a good leader who can provide for our economic development, security that will impact human development, provide the kind of infrastructure we need.”

Meanwhile, Ahmadu Fintiri, the governor of Adamawa State, has said he will support former vice president Alhaji Atiku Abubakar if he runs for the PDP presidency in the 2023 general election.

I gathered that Fintiri, who is the chairman of the PDP National Campaign Committee , made the remarks on Tuesday, October 26, when he appeared as a guest on Channels TV. Politics Today.

The Adamawa State governor said Atiku had all the necessary resources to govern Nigeria, stressing that he would try to become the next president of Nigeria if he won the PDP presidential ticket.

Gabigol, who is he? The ‘new Neymar’ has been linked with a January move to Arsenal